It’s January and for the 14th January in a row, I hopped on a plane to Bangkok. It’s always a flurry of activity the few weeks before a departure because I’m not only getting ready for a holiday, I am going to do what keeps my business alive, what provides me with a job and income.  I am going to SE Asia to seek out the newest or most interesting and unique items I can to bring back to the shelves of the Green Gecko.

This year’s itinerary took us through Dubai.  A place I’ve never been. So of course it called for a short layover to explore.

How do you describe Dubai?  Is there a word the means ‘Wow’ but times 10?  I usually travel in places that are 2nd or 3rd world countries; places where the wow-factor comes from seeing what people can do with so little, or when farm animals out number people on the bus.

Dubai is definitely a different wow.  It is a city of bright lights, tall buildings, 5 star hotels, expensive cars and over-the-top at every corner.  It’s a place the prides itself on setting world records.  And not longest flag pole sitting or most hotdogs eaten; more like tallest building, largest mall, longest fireworks display (1hr 55minutes for New Year 2014!).

Dubai is sometimes referred to as the ‘playground of the Arab world’.  And a playground it is…if you’re in the elite status that can afford it.

Thanks to having friends in high places (a friend from way back when I worked in the hotel industry) we got to experience some of this high life that is Dubai.  Some things that might be attached to the sentence ‘If I win the lottery, I’ll…..’ 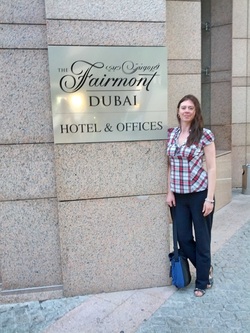 This is Atlantis The Palm a hotel  built on a man-made archelegio, one of the most expensive hotels in the world where some hotel rooms and a restaurant are ‘underwater’ in the aquarium.  You can watch sharks swim past from your kind size bed.

Dubai is a city of amazing architecture.

We toured the Burj Al Arab.  Although not on official status, the hotel is widely known as a 7 star hotel, yup seven! It is however officially the tallest suites hotel in the world and one of the most expensive hotels in the world (think several $1000 per night). Built on an artificial island of reclaimed land it appears to be right in the sea.

It was a real experience to get a tour of this hotel  This is how the rich of the rich live.  Every little detail is looked after.  Every colour carefully chosen, everything in the design refers back to the history of Dubai.  This place is huge.  You could fit the entire Effel Tour, in the lobby (with room left over). The gorgeously coloured fountain in the lobby was designed by NASA engineers.  It does a beautiful water display and not a drop sprays out onto the audience.
I spent a good part of my 20’s working in a 5 star hotel and so I find the details of a high end hotel intriguing. The guest suites are straight out of a movie set.  No ‘deluxe standard’ rooms here.  All are 2 floor suites with amazing views, gold painted accents (like paint made from real gold, not gold in colour), guilded mirrors above the bed, tv’s that sink into the table so not to disrupt the view when not in use.  The bathroom was about the size of the Green Gecko!.  Gold plated Ipads are the current new feature in every room.  Oh, and you have your own butler with his private entrance as to not disturb you while he cares for your every whim.  Everything felt ‘over the top’

Our tour guide from the concierge, who's uniform included the hotel's logo in gold earrings and a necklace, handed us her business card with the hotel logo in real gold paint.  She was lovely and informative and after the tour we asked to go the restaurant for a drink.  It was full of guests having high tea but we were permitted to sit at the bar and have a drink.  This is the highest suspended restaurant in the world.  The views were incredible.  The cocktail was lovely and amazingly none of the staff made us feel that we didn’t belong.  (which was nice of them since we clearly didn’t).  Totally worth the $100CND for 2 cocktails.  You only live once.
Back in the taxi and back to semi-reality we took the afternoon to take in some shopping, one of Dubai’s major tourist lures.  While the city has more than 70 shopping malls, The Dubai Mall is the largest in the world. Very upscale, very classy, lots of big names you would recognize from the fashion world.  In Bangkok I have browsed malls with similar high end shops and fixtures but in Dubai a mall can’t just be a mall.  A mall also includes a ski hill, no not beside the mall, IN the mall.  An indoor ski hill and fake snow is nothing a Canadian would generally get excited about but there is something to be said for the fact that in the shopping mall is a hill big enough for a chair ski lift.  In a country that often sees temperatures of 50C+ it is a bit of a phenomenon. It was a people watching highlight to see the tourists in full ski gear, enthralled with the (fake) snow.

Also part of the mall experience is the world’s largest indoor skating rink and a water fountain show, that in keeping with the record setting, is bigger than the Bellagio's.

I’d say I felt more comfortable in the ‘Old Town’ style of Duabi where markets are called Souks and the atmosphere is more Arabian than upscale with small stalls selling handicrafts, spices, silks and of course souvenirs.
An interesting stat about Dubai is only 17% of the population is Emirati (from Dubai or one of the Emirates).   The rest of the residents are immigrants, mostly Indian, Pakistani or Bangladeshi. Amazingly only 3 generations ago Dubai was a fairly small city where most incomes came from fishing or pearl diving.  In the short period of time between the 1960’s and now, money started to come in from oil  but with not nearly as much oil  as neighbouring countries like Saudi Arabia, coupled with world events such as the Gulf War, Dubai looked beyond oil for future economy and started to capitalize on the tourist industry.  Most Dubai nationals make their money owning companies and running businesses.  Through a connection we walked a floor of a car garage which holds one man’s personal car collection.  7 Ferraris, Mclaren, Bugotti, 2 Bentleys, Rolls Royce, Land Rover, 2 Mercedes, Paghani (looks like a Bat-mobile!), BMW 800.  All lined up.  Cars are not really my thing (if you ask me what kind of car I drive I’m likely to say ‘blue’).  But even I could see the 'wow' of the collection.  And Peter was more than impressed. Some were kept in a ‘carcoon’ to protect them.  Pretty wild. Plus the inside gossip scoop is the reason he rents this floor of the garage is he hasn’t told his father about his car collection. Kind of like when I hide a new pair of shoes I really didn’t need, but so wanted, in the back of the closet? Well, or kind of not.
In the midst of all this excess the Emirates still adhere to a strict Muslim law. This means strict rules, harsh punishment.  No drinking, no pork, Muslim dress for women, no public displays of affection.  Public drunkenness is illegal and there is zero tolerance for drinking and driving.  If you are in even a minor fender-bender and have any alcohol in your system you are thrown in jail. Zero tolerance is also the law for drugs and you can be jailed even for having codeine in your blood stream. 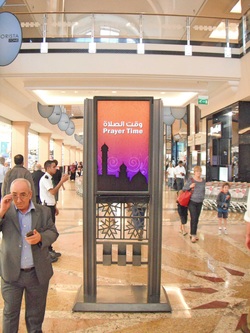 Dubai is definitely another world, a place unto itself.  It was pretty amazing to experience a little of how ‘the other half live’ even if it was still from a distance.

Now off to Thailand….where I can read a price tag without emitting an unconscious gasp.

Where farm animals do often join you on bus rides; life is a little easier on the pocket book but no less fun.